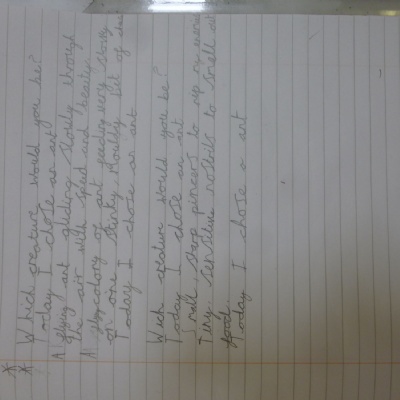 Another fantastic day in 3Y! The children became poets and analysed, planned, wrote and then performed their very own poem linked to the National Poetry Day theme of 'Choices'.

This morning 3Y dedicated themselves to some fantastic poetry. First we read and analysed the amazing poem 'Which Wild One?' by James Carter. We then decided which wild one we would be if we could choose to be any animal, an important part of this discussion was focusing on why we had chosen this animal as this was going to be key in creating our poem. We then spent some time creating some artwork by drawing our animal that we would like to be. After this, we created a work bank full of exciting verbs, adjectives and adverbs that we could use in our poem. We then learnt about repeating pattern poems and had a go at writing our own! Later we then performed our poem to the rest of the class, which was a very brave thing to do! I was amazed at all of the fantastic poems produced and the amazing effort and involvement that the children showed throughout the day! The children should be very proud of themselves - what super poets we have in 3Y!