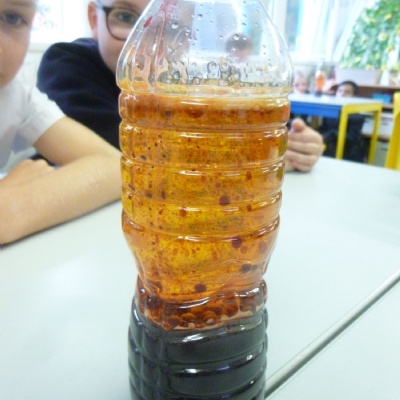 Please enter an introduction for your blog post here.

The children were mesmerised by the range of hands on experiments that they took part in over the course of the day.

Method:
1. Fill the plastic bottle 1/3 full with water.
2. Add a few drops of food colouring to the bottle.
3. Fill most of the rest of the bottle with oil.
4. Drop the Alka-seltzer into the bottle.
5. Stand back and watch.

What Happened?
The ingredients in Alka-Seltzer combine with water to form a gas called carbon dioxide. The oil and Alka-Seltzer do not combine in this way though. The Alka-Seltzer tablets sink through the vegetable oil until they reach the layer of coloured water. There, the Alka-Seltzer dissolves in the water and forms a gas called carbon dioxide. The gas is lighter than the water and oil, so it bubbles up, taking a bit of coloured water with it as it moves through the oil layer. As it reaches the top, the bubble pops and the colour falls back down through the oil. The effect should have been reminiscent of a lava lamp.

Children learnt about reversible and irreversible changes by looking at melting and solidifying.

When you heat milk and add an acid, the casein molecules unfold and reorganise into a long chain. Each casein molecule  hooked together with many more of itself in a repeating pattern. The polymer this forms can be scooped up and moulded, which is why it is a plastic!

The children were shocked when they took a bottle of thick cream and shook it for over twenty minutes to see that it had changed to butter. We spread our butter onto some bread to try it! We looked at the production of creat to butter happens on a larger scale.

Each group made a rocket and attached a camera canister to the bottom when added with water and aka seltzer tablets we saw our rockets task off. What happened? Well carbon dioxide is released inside the canister. Pressure from the gas builds and eventually pops the lid off. The thrust, or push, of your rocket is related to how much pressure built up inside the canister before the top popped off.