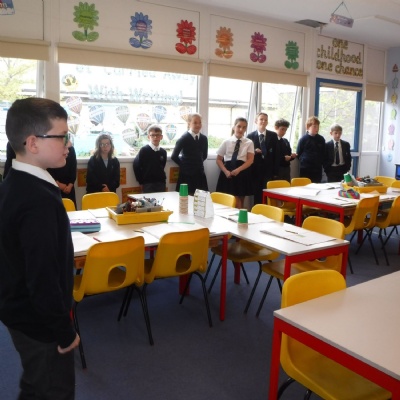 In English, this term, Year 5 are studying the text 'The Firework-Maker's Daughter'. This week has been spent familiarising ourselves with the first few chapters and getting to know the main characters.

One way we have related to the characters was through a 'conscience alley' considering whether Chulak should continue allowing people to write on Hamlet for money. Harry took on the role of Chulak and the class split into two groups.

The group arguing for Chulak to continue this money making scheme, argued points such as: 'You've nearly got all the money you need to run away, why stop now?'

'You are helping to promote local businesses'

The group arguing against Chulak allowing people to write on hamlet argued points such as:

'This is animal cruelty!'

'Animals have feelings too'

'What are you doing? You animal abusing monster!'

5Y are enjoying their new book and now have a secure understanding of the main characters.