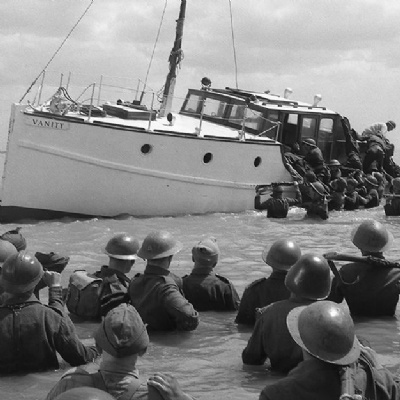 The year 2020 marks the 80th anniversary of the evacuation of more than 300,000 Allied soldiers from the beaches of Dunkirk, France between May 26th and June 4th 1940, during World War II.

British, French, Canadian, and Belgian troops had been forced back to Dunkirk by the advancing German army. Nearly all the escape routes to the English Channel had been cut off; a terrible disaster had appeared inevitable. At the time Prime Minister Winston Churchill called it “a miracle of deliverance”.

On 12th May 1940, Adolf Hitler ordered the invasion of France. By 14th May 1940, German tanks had crossed the Meuse and had opened up a gap in the Allied front. Six days later they reached the English Channel.

The British, French and Belgium governments had seriously underestimated the strength of the German forces. As a result the British Expeditionary Force (BEF), as well as French, Canadian and Belgian troops, found themselves fighting against overwhelming odds. Before long, the Allied forces had retreated to the harbour and beaches of Dunkirk where they were trapped, a sitting target for the Germans.

In an effort to at least evacuate some of the troops, just before 19.00 on the 26th May, Winston Churchill ordered the start of ‘Operation Dynamo’. This plan took its name from the dynamo room (which provided electricity) in the naval headquarters below Dover Castle, where Vice Admiral Bertram Ramsay had planned the operation.

Destroyers and transport ships were sent to evacuate the troops, but they only expected to have time to lift off about 30,000 troops.

However, in one of the most widely-debated and potentially pivotal decisions of the war, Adolf Hitler ordered his generals to halt for three days, giving the Allies time to organise the evacuation. In the end, despite heavy fire from German fighter and bomber planes on the beaches, no full scale German attack was launched and over 330,000 Allied troops were eventually rescued.

The evacuation was by no means straightforward. Before long the harbour became partially blocked by ships sunk during the constant raids from enemy aircraft. It became necessary to take the troops off the nearby beaches, an almost impossible task because of shallow water which prevented large ships from coming in close to shore. Small ships were needed to ferry the troops from the beaches to the larger ships.

The children watched a clip of Dunkirk and then wrote extraordinary recounts from the point of view of someone there. The writing produced was of the highest standard and was emotive. The writing also showcased a number of writing skills. Click on some of the examples below!