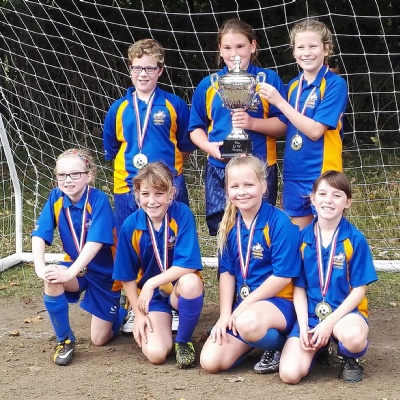 Upton Junior School in Broadstairs is flying the flag for Thanet at the upcoming Kent Girls Football Finals.

They won the right after beating off strong competition to win the Thanet Girls Football Trophy that featured 13 other sides.

The competition featured two pools of teams, and Upton emerged undefeated from Group A to face a talented Minster team - also undefeated - in the final.

Minster went ahead in the first minute of the game, scoring a superb individual goal that highlighted the quality of football on show.

Upton regrouped, changing their tactics, and had numerous chances before Alesha B equalized just before the interval.

A strong defensive triumvirate of Amelia D, Ivy H and captain Ella D kept Minster at bay, while Charlotte S combined with Michaela and Alesha B to form an attaching threat.

However, the match moved through extra time and into penalties, leaving the goalkeepers with the chance to shine. With the score at 3-2 in Upton's favour, keeper Morgan B saved the final Minster penalty to ensure the trophy returned to Upton.

In the TPSFA Trophy for second placed teams, Newington overcame St Ethelbert's to win the trophy for the first time.

The competition was held at Upton School, and Head of Upper School Dave Walker said: “It was a fantastic competition, full of skill and enthusiasm. All the games were played in the right spirit and Upton squeezed home in a tense penalty shoot-out.

“We are proud to represent our friends from the other Thanet school teams in the finals and we will do our very best.”