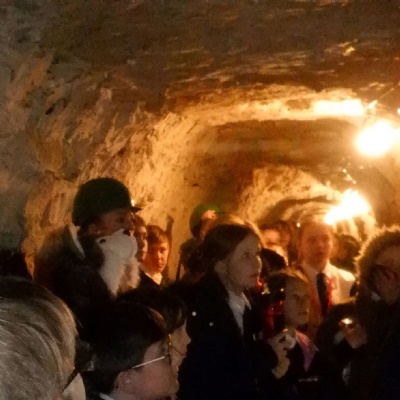 The underground sanctuary that was home to thousands during wartime has been explored by children from Upton Junior School in Broadstairs.

The Ramsgate tunnels cut deep into the chalk created a ‘town under the town’ and are an integral part of Thanet’s living history.

They are a perfect educational aid for Year 6 pupils studying World War 2 and the impact it had upon people of all ages in particular youngsters of similar ages to themselves.

They heard about the ‘mad mayor’ whose foresight helped save many lives; discovered how the tunnels were built; listened enthralled to stories of life underground as people hid from the bombs that showered down above them.

The tour included a short film show in a 150-year-old Victorian railway tunnel before pupils headed off into the purpose-built air raid protection network.

Head of Year 6 Athanasia Papa-Adams said: “Visiting the tunnels gave our children the chance to experience a real part of wartime Britain that has been preserved right on our doorstep.

“The children were in awe of the tunnels and how WW2 affected our local area. They heard how on August 24, 1940, 500 Luftwaffe bombs fell on the Thanet town within just five minutes. The shelters in the tunnels saved many lives but 29 civilians and two soldiers were killed. Large parts of the town were flattened, with around 1,200 destroyed and 300 families left homeless.”

A more light-hearted part of their wartime research and learning has involved setting out to get to grips with the jumpin’ jive.

They turned their attention to the dance floor to explore the craze that swept through Europe in the late 1930s and 1940s.

In the United States the term ‘swing’ became the most common word used to describe the dance, and the term ‘jive’ was adopted in the UK.

Parents were invited into school to enjoy learning the jive steps with their children, with dance trainer Lizzie Davies taking them through the steps.

Miss Papa-Adams added: “The session saw children pair up and learn the steps before putting it all together. It was tricky, but they worked hard and got the spins in too. They managed to incorporate the jive swing moves together with plenty of kicks, flicks and pointed toes.

“Each class, their teacher and their parents thoroughly enjoyed it. Lizzie was brilliant at teaching the children the choreography, they were so engaged and gave it their all.”

Deputy Head of School Dave Walker said a wide range of topics is making up the children’s in depth research for the World War 2 topic.

He said: “It an important exploration of our country’s social history – it is really opening their eyes to what life was like for young people and families during wartime Britain.”