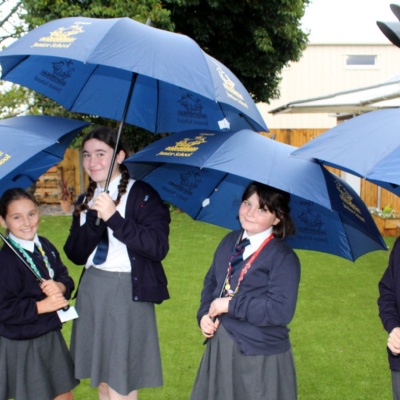 An outdoor oasis of calm named in memory of The Queen has been officially opened at Upton Junior School in Broadstairs. The Queen Elizabeth II ‘Sense It’ sensory garden offers a tranquil haven for girls and boys to enjoy reflective moments, quiet reading and drawing, and sharing their thoughts with the school’s pastoral care team and pupil mentors.

Carefully selected shrubs, flowers and herbs are laid out among grassed and paved areas with atmospheric lighting, foliage-style green seating, and flowing sculptures.

At the opening ceremony children filled lavender comfort bags and received commemorative personalised Sense It beans to plant and grow at home, as well as enjoying navigating a sensory circuit and playing games, together with a lively performance by the Young Voices choir.

Creating the garden has been a labour of love with a determined commitment from the whole school community including children, staff, families and governors, with huge support from a range of sources including grants from Kent County Council’s Reconnect funding, Tesco, and Cummins Power Generation, and a small army of volunteers.

Kate Gardner, Charities and Community Lead for Viking Academy Trust that includes Upton as a partnership school, thanked all the supporters for realising the dream project.

She said: "The response to our plea for support in fundraising, donations of materials, and help to create the garden was immense. The local community donated paving slabs, bricks, plants, time, and money. Special thanks go to The Broadstairs Town Team, The Potting Shed, Broadstairs College and Daniel Hobbs Electrical for going the extra mile to make the project a reality. There were also generous donations from Star Lane Stores, and Haste Rental Apartments.

“The proverb 'It takes a village to raise a child' has never been more pertinent. Post-pandemic and in the current cost-of-living crisis, Upton and the local community pulled together to make the Queen Elizabeth II Sense-it Garden happen.

“Unfortunately, with government funding for education not keeping pace with inflationary pressure on schools, we are having to be more inventive with our spending and are relying on external funding for these vital projects. I would like to change the proverb to 'it takes a local community to raise a child' as ours has certainly come up trumps for this outdoor learning project."

Speeches from Head of School Darci Arthur, Deputy Head of School Dave Walker and the Upton deputy house captains highlighted the importance of the sensory garden as first class resource in support of the school’s ongoing mental health and well-being programme.

Guests included the Mayor and Mayoress of Broadstairs and St Peter’s Cllr Roy Dexter and Cllr Brenda Rogers who described the garden as “an amazing project that highlights the effective liaison between the school and the wider community.”

Chair of Governors Robin Curtis added: “This is an important addition to the school and I am grateful to everyone who helped and supported the idea – the fundraising was magnificent.”

In-school fund raising was started by three pupils – Iyla, Caitlin and Emilia who sold their fidget toys for donations. This was quickly followed by sponsored runs - an individual effort by pupil Max and a team effort by Upton’s young footballers who all play for Ramsgate FC under 9s side. As momentum gathered this was followed by many other events including a Christmas shop, selling daffodils for Mother's Day, raffles, and various playground sales. Former Upton pupils made planter benches as part of their carpentry course at Broadstairs College.

The Queen Elizabeth II Sense It sensory garden – named as a lasting tribute to Her Majesty - blossomed from the concrete space left when the former sports hall was demolished (and replaced by a purpose-built centre in September).

Michaela Lewis, Executive Head Teacher of the Viking Academy Trust, said: “Heartfelt thanks go to everyone involved from start to finish whose energy, determination and belief helped create our wonderful sensory gardens. They have united to provide a fantastic outdoor haven that will benefit generations of children for years to come.”